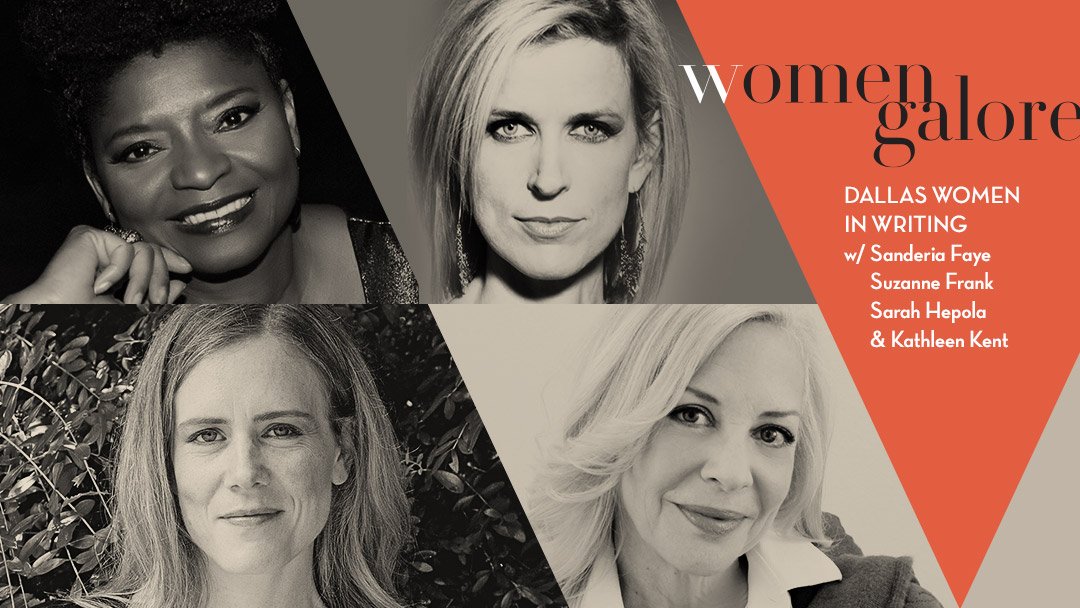 Join Dallas-based writers including Sanderia Faye (Mourner’s Bench), Suzanne Frank (Laws of Migration), Sarah Hepola (Blackout) Kathleen Kent (The Heretic’s Daughter)  in a discussion with Culture Editor of the Dallas Observer, Caroline North about the challenges of being a female in the literary business.

Sanderia Faye was born and raised in Gould, Arkansas. She is the author of Mourner’s Bench (University of Arkansas Press, 2015). Her work has appeared in various literary journals and in Arsnick: The Student Nonviolent Coordinating Committee in Arkansas, edited by historians Dr. Jennifer Wallach and Dr. John Kirk. Faye is co-founder and fellow at Kimbilio Center for Fiction.

Suzanne Frank is a newspaper and magazine journalist who has traveled extensively in Egypt, Greece, and Israel. A native of Texas, she lives in Dallas. She has written 4 novels under her own name and a short series of light mysteries under the name Chloe Green, which feature a fashionable sleuth named Dallas O’Connor. Her four novels are a linked series of time-travel fantasy that take a woman from the 1990s to ancient Egypt, Atlantis, and Biblical Israel. She draws heavily on history, myth and especially the Judeo-Christian Bible.

Sarah Hepola has written many stories about drinking and eating too much. Her essays on culture have appeared in the New York Times magazine, Elle, The New Republic, Glamour, The Guardian, Slate, The Morning News, and Salon, where she was a longtime editor. Her past jobs include: Travel columnist, music editor, film critic, sex blogger, and for about 15 seconds in the late ’90s, she taught high school English. She lives in East Dallas, where she enjoys playing her guitar poorly and listening to the “Xanadu” soundtrack. Blackout (Grand Central) is her first book.

Kathleen Kent is the author of two best-selling novels, The Heretic’s Daughter, for which she received the David J. Langum Sr. award for American Historical Fiction, and The Traitor’s Wife (published in hardcover as The Wolves of Andover). Her most recent novel, The Outcasts, was awarded the American Library Association’s “Top Pick” Historical Fiction in 2014 as well as being the recipient of a Will Rogers Medallion award for Western fiction. She is currently working on her fourth novel based on a short story published in the crime anthology Dallas Noir. Her novels are collectively published in 16 countries.