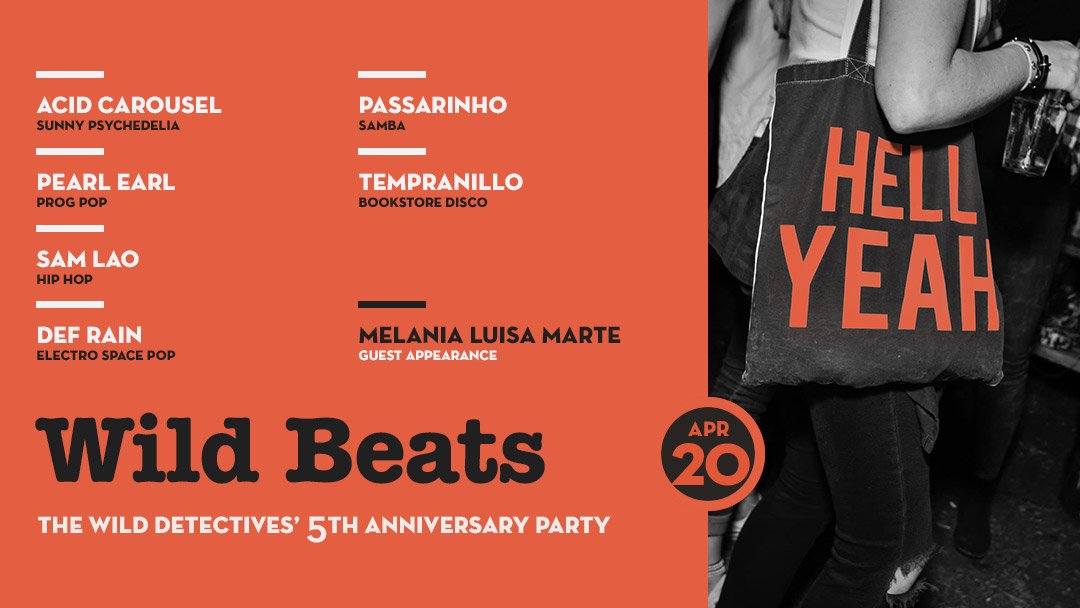 700 plus events, hundreds of The Savage Detectives copies sold, more than 20,000 gallons of booze served: The Wild Detectives turns 5! The occasion requires a proper party, don’t you think?

700 plus events, hundreds of The Savage Detectives copies sold, more than 20,000 gallons of booze served: The Wild Detectives turns 5!

The occasion requires a proper party, don’t you think? We’re thinking samba, pop, hip hop, punk, electro, acid rock, spoken word and much more. Same as every year, we’ll put together a multi-genre full day festival to say ‘thank you everyone’ quite loudly for all of the support we’ve gotten over these past 5 years. Hell yeah, thank you so very much Dallas, we love you!

You can also get your tickets in advance here.

And now, without further ado, let’s dive into who is celebrating with us our 5th birthday; some of the best music talent in Dallas + direct from Madrid, our good friend Tempranillo, who’ll close the night with yet another dance session of our mythical Bookstore Disco.

Acid Carousel was one of our favorite discoveries from last year. The Denton seven piece psych rock band will play an acoustic set on our backyard. More info on this Dallas Observer article.

Pearl Earl is a psychedelic prog pop band from Denton, TX. The band was founded by singer and guitarist Ariel Hartley in 2014 with Bailey Chapman and Stefanie Lazcano, with Chelsey Danielle joining in 2017. They’ve had the opportunity to play with The Black Angels, Thee Oh Sees, and Tripping Daisy this year and are about to go on their 5th national tour this summer. Pearl Earl’s music has been described as ‘Pink Floyd in the sunlight’ and ‘Pentangle meets Josie and the Pussycats’.

Sam Lao is a rapper/singer in Dallas, Tx. Although an artist from birth – mainly drawing, painting and graphic design, she only recently began creating music. Despite being a rookie in the game, Sam Lao has already begun to cause a stir in the city of Dallas. Her debut EP, West Pantego, received rave reviews from both Dallas and national media only to be outdone by her most recent project SPCTRM. Released in 2016 to much anticipation and acclaim she coordinated a sold out release show celebrating the project even going as far as building her own stage setup for the show further proving that Sam is a force to be reckoned with on all levels.

You can listen to Sam Lao here.

Electro-space pop duo Def Rain – singer/songwriter Ashley Cromeens and CJ Abe Lincoln – formed in 2011 in Denton, TX and quickly began to draw a buzz in the North Texas scene. Known for fog engulfed, laser saturated live shows, Def Rain quickly began captivating audiences, including the lead singer of The Flaming Lips, Wayne Coyne. “We wanted to find a way to have a live show that was entertaining for the audience and for us, says Cromeens. Every show is a little different than the last, incorporating anything from backlight reactive jumpsuits to translucent ghost lamps.” “Def Rain’s sound is a mixture of genre-bending and blending, incorporating ethos of hip-hop alongside surf-rock poetry,” says THWRD magazine co-publisher, Lee Escobado. “Cromeens is as much interested in being ahead of the curve as she is in widening it.” Def Rain looks forward to their sophomore LP release as well as an EP to quickly follow.

You can listen to Def Rain here.

Passarinho is a large ensemble based in Denton, TX that specializes in performing samba, baião, maracatú, and other traditional Brazilian repertoire. We assure you, you’ll feel like your feet are animated by a life of their own.

From the nights of Madrid we’re bringing our old friend and WD collaborator, Tempranillo to close Wild Beats in yet another mythic session of our legendary Bookstore Disco. He’ll walk us over some of the most exciting hits and electronic works of the past two decades, and you, my friend, will be dancing.

You can listen to Tempranillo here.

Melania-Luisa Marte is a nationally touring Afro-Latina poet and host from New York. She is a finalist of both the 2018 Individual World Poetry Slam and the 2018 Women of the World Poetry Slam Competition where she ranked 5th out of 96 poets. Her work can be found on platforms such as Write About Now, Slam Poetry Inc. and publications such as Ain’t I Latina, Dallas Morning News And People En Español. Marte is a speaker, host of a feminist monthly live talk show, “COMMU.N.I.T.Y” and a Teaching artist, facilitating writing and wellness workshops in both English and Spanish. She is also the founder of Melanin Goddess, a Dallas based feminist healing collective for women and femmes of color. She has performed and taught at cities across the country. Her debut collection of poetry, MELA, was released November of 2018. You can get in touch with her at www.melanialuisa.com

We’re turning 5, and this still feels like just the beginning. We’re looking forward to celebrate this with you.

The WD Book Club – Let Me Tell You What I Mean 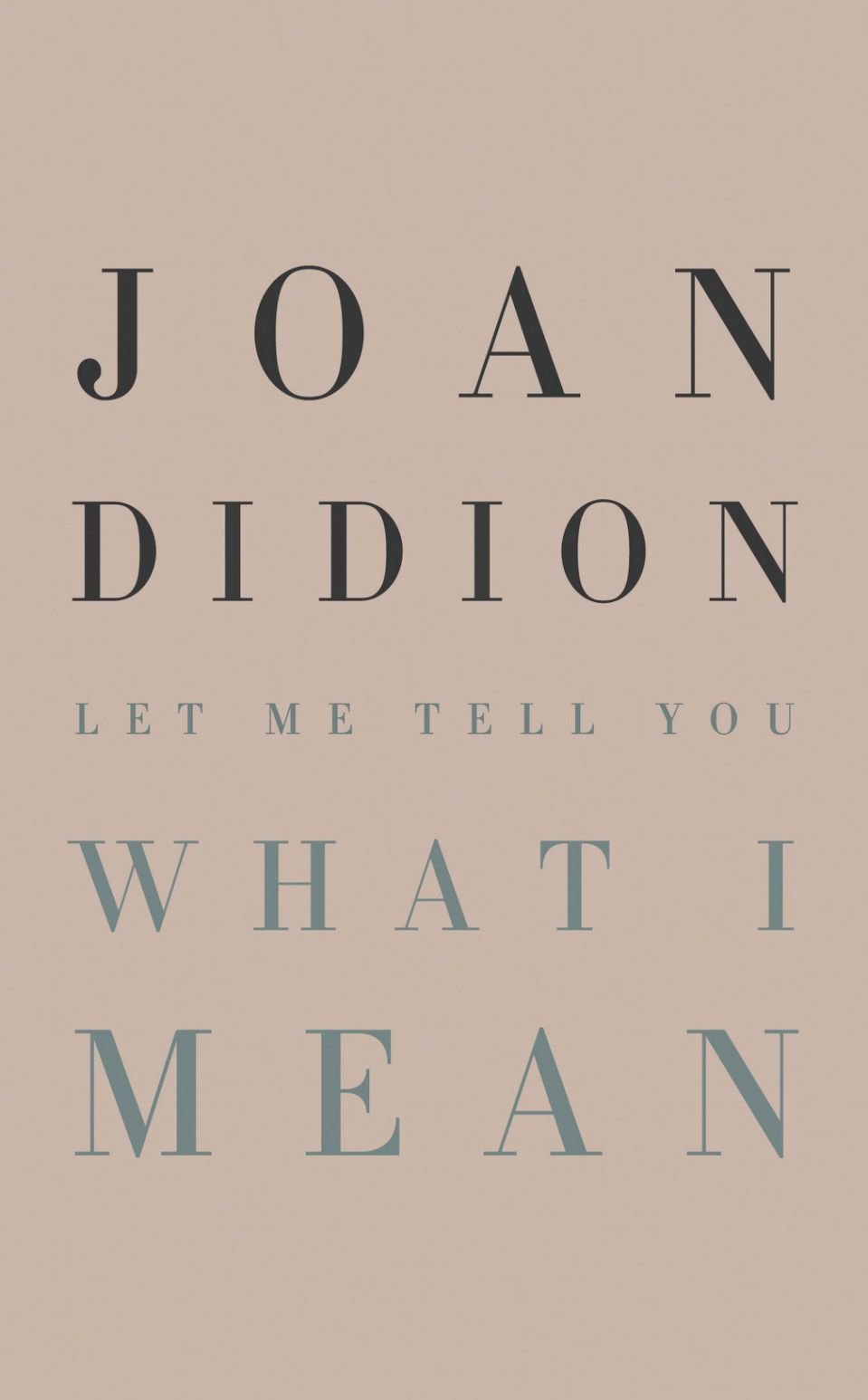 Our next book club selection is Joan Didion´s Let Me Tell You What I Mean. Here, Didion touches on topics ranging from newspapers ("the problem is not so much

Our next book club selection is Joan Didion´s Let Me Tell You What I Mean. Here, Didion touches on topics ranging from newspapers (“the problem is not so much whether one trusts the news as to whether one finds it”), to the fantasy of San Simeon, to not getting into Stanford. In “Why I Write,” Didion ponders the act of writing: “I write entirely to find out what I’m thinking, what I’m looking at, what I see and what it means.” From her admiration for Hemingway’s sentences to her acknowledgment that Martha Stewart’s story is one “that has historically encouraged women in this country, even as it has threatened men,” these essays are acutely and brilliantly observed. Each piece is classic Didion: incisive, bemused, and stunningly prescient.

This will be a virtual discussion, here is the link to the  meeting

Also, here is the link to purchase the book through our virtual shop

Let’s meet up and talk Literature.

With an investigation that gathers information from soldiers, middle and high-ranking commanders of Mexico’s armed forces, the authors offer the other side of the fight against drug trafficking: ongoing kidnappings and disappearances, ever growing extortions, and the conflict with the “huachicoleros”, groups committed to the theft and illicit sale of motor fuel. These two journalists reveal at what point the line between obedience and treachery is crossed, and why despite the multiple recommendations from human rights organizations, people continue to be tortured, illegally denied of their freedom, and assassinated without any mercy or due process.

This book, winner of the first-ever Javier Valdez Cárdenas Award which acknowledges combative journalism, also has a human side and sheds a light on the conditions in which soldiers and victims live.

The conversation will be in Spanish language, follow the link above to join it.