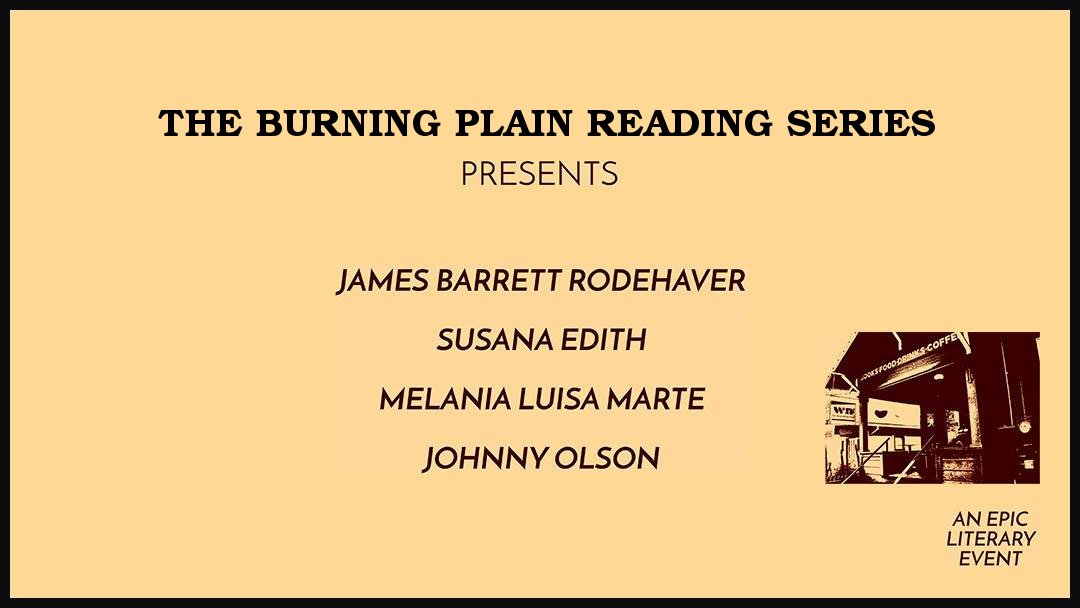 We’re very proud to announce that, The Burning Plain Reading Series –former Pegasus Reading Series and named Best Poetry Night by the Dallas Observer in 2015– hosted by local poets and friends Sebastian Paramo and Courtney Marie, will start a monthly residency at The Wild Detectives showcasing writers in the North Texas area and beyond.

Born in Mexico and raised in New York. SUSANA EDITH now finds herself exploring the scenes of Dallas, where she has worked collectively with other POC artists to create a space where their voices are truly heard. Much of her work explores the realities and conditions of her self exploration of what it means to be a brown mujer both in the POC community and outside it. She is a founder of Lucha Dallas.

MELANIA-LUISA Marte is a first generation American. Her work explores many subjects including her afro-latina roots, culture and love/dating as a modern day feminist. She represented Dallas in the 2016 Women of The World Poetry Slam Competition. She is also a member of the 2017 Dallas Poetry Slam Team currently ranking 5th in the nation. She is a poet, writer and founder of GetFreeStayWoke, A movement centered on intersectional feminism, self-love and resistance. To learn more, follow her on Instagram at @feministmami.

JOHNNY OLSON was born in Chicago, Illinois. After surviving a brief, yet violent war (Desert Storm) as a United States Marine, he hung up his cammies and rifle to instead grab his pen and notepad where he found his passion for writing. In 1998 he found himself in Dallas, Texas, where what was supposed to be a brief stint in the South turned into a decade and a half…and counting.

In 1999, Johnny, with a couple of other mad cohorts, started Mad Swirl. He now serves at the chief editor, webmaster, and host at Mad Swirl’s monthly Open Mic night.

Johnny’s work first appeared in print in 1996 in the now defunct Lip Magazine. Since then, his words and images have found their way onto a few online and printed zines thru the years. To name a few: Mad Swirl: Issues I-VI, Haggard and Halloo, 10k Poets, PAO Productions: The Open Mic Project.

Inner Moonlight is back at the Wild Detectives in person! RSVP to meet us in the backyard at 7:30pm on Wednesday February 9th for live poetry from one featured

Inner Moonlight is back at the Wild Detectives in person! RSVP to meet us in the backyard at 7:30pm on Wednesday February 9th for live poetry from one featured writer, with a brief open mic to follow. Don’t worry, podcast fans! We will record the live show and release it as a podcast episode for y’all. This month we are stoked to feature poet Emily Ramser!

Emily Ramser is a queer activist-teacher-scholar-poet living in Denton, Texas where they write, collaborate, and perform with the creative collective Spiderweb Salon and study  blackout poetry. Check out their history of blackout poetry at https://www.thehistoryofblackoutpoetry.org/ and follow them on Twitter @RamsersRhetoric.