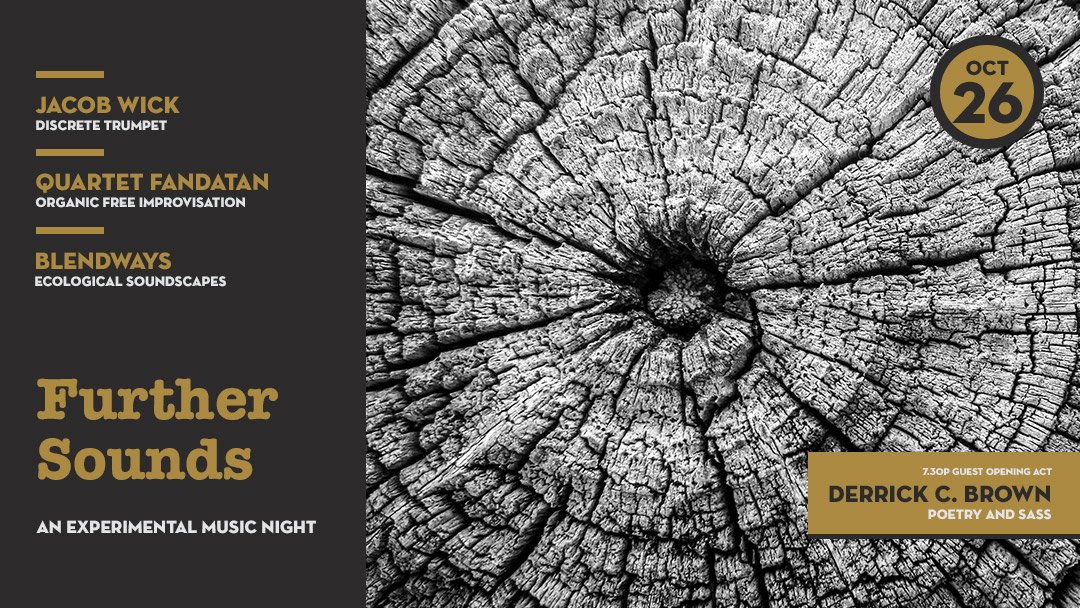 Further Sounds comes back with its fall instalment. This series celebrates those explorers that wander beyond the edges of melody. In case you didn't know by now, Dallas has a

Further Sounds comes back with its fall instalment. This series celebrates those explorers that wander beyond the edges of melody. In case you didn’t know by now, Dallas has a very active and rich –yet not always visible enough– experimental scene; we’ve invited some of its most talented artists to showcase what’s going on in the local outskirts of sound. Don’t miss the opportunity to be fascinated by the sound explorations of Jacob Wick, Quartet Fandatan, and Blendways.

Austin poet Derrick C. Brown will open the show with a performance of his sassy poems at 7.30p. More info here.
First music set to start at 8.30p.

Jacob Wick is a trumpet player, improviser, and composer. Originally from the suburbs of Chicago, Wick has lived in Brooklyn, Oakland, and Los Angeles, and has performed with a variety of improvisers and composers in a variety of contexts, including at the Whitney Museum of American Art, the Moers Jazz Festival, and the University Museum of Contmeporary Art (MUAC) in Mexico City. He has performed with Matana Roberts, Andrea Neumann, Toshimaru Nakamura, Andrew D’Angelo, and many others. He has released recordings under his name or as a collaborative group on Marginal Frequency (Washington), Lengua de Lava (Merida), Relay Records New Composers (Chicago), Prom Night (Brooklyn), Peira (Chicago), Diatribe (Dublin), and Creative Sources (Lisbon). A solo LP, feel, will appear on Thin Wrist (Los Angeles) in the near future.

Louise Fristensky (b. 1987) is a composer and improviser interested in exploring collaborative sonic spaces and discrete sound worlds, with projects ranging from acoustic solo and chamber ensemble, to electroacoustic experimental composition. Her compositional voice ranges from sparse, cell-based explorations to lush, atmospheric and playful lyricism. Recent and upcoming projects include a piece for piano and electronics, a piece for soprano, electric guitar, and harp, and a collection of fixed media scenes. Louise is currently pursuing her Composition PhD at the University of North Texas.

Andrew Jordan Miller studied music composition at the University of North Texas where he focused on improvisation and computer music. He has a particular interest in text and graphic scores. He has performed with numerous musicians and improvisers including Adam Goodwin, Jon Jackson (anteroom), Karl Roehling, Monte Espina, and Jandek. He operates a music series called Industrial Improvement Project. Currently he resides in Dallas, TX working as an interaction designer.

Ernesto Montiel was born in Maracaibo, has been playing free improvisation steadily with some projects since the mid-nineties (El Jaibo, Metra, Los Jardineros Del Chance, Gabinete Sonoro Goma Espuma, Oso/Malderabia), he is half of the electroacoustic free improvisation duo Monte Espina and is a visual artist that for some years has been developing a chance driven body of work that he has named Stochastic Ethics. Also has been a dj for some decades, lately under the name Mutarrancho.

Karl Roehling is a Dallas-based reedist with an emphasis on free improvisation and occasionally, composition. They also plays in Tri Geamikoj, Frejyalune, and Baby Blood along with more ad hoc ensembles with Aaron Gonzalez, Jamison Williams, Damon Smith, and others.

You can listen to Quartet Fandatan here.

You can listen to Blendways here.

Inner Moonlight is back at the Wild Detectives in person! RSVP to meet us in the backyard at 7:30pm on Wednesday February 9th for live poetry from one featured

Inner Moonlight is back at the Wild Detectives in person! RSVP to meet us in the backyard at 7:30pm on Wednesday February 9th for live poetry from one featured writer, with a brief open mic to follow. Don’t worry, podcast fans! We will record the live show and release it as a podcast episode for y’all. This month we are stoked to feature poet Emily Ramser!

Emily Ramser is a queer activist-teacher-scholar-poet living in Denton, Texas where they write, collaborate, and perform with the creative collective Spiderweb Salon and study  blackout poetry. Check out their history of blackout poetry at https://www.thehistoryofblackoutpoetry.org/ and follow them on Twitter @RamsersRhetoric.