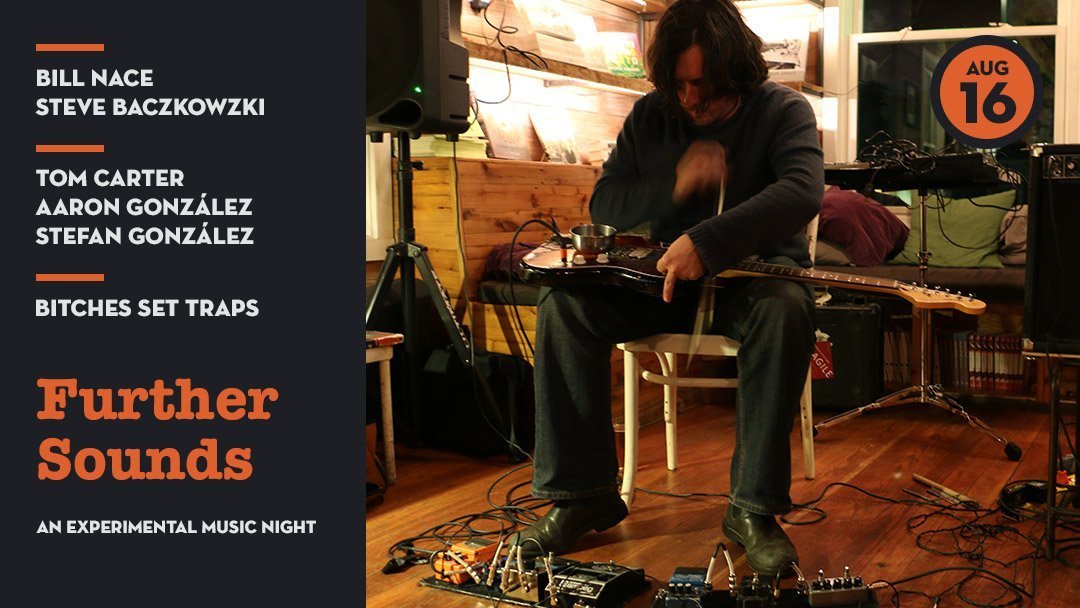 Further Sounds brings back Bill Nace to The Wild Detectives after his amazing perfomance along with Jake Maginski back in 2016 (if you were there we're sure you'll remember. This

Further Sounds brings back Bill Nace to The Wild Detectives after his amazing perfomance along with Jake Maginski back in 2016 (if you were there we’re sure you’ll remember. This time he’ll be accompanied by Steve Baczkowski. Other experimental musicians such as Tom Carter, local legends Aaron González and Stefan González; and Denton’s feminist ensemble Bitches Set Traps will join to this celebration of sound beyond the edges of melody.

Mutarrancho will be selecting mucha buena musica before and between their sets.

Bill Nace (guitar) met Steve Baczkowski (reeds) in a town famous for hockey sticks, & first played together in a converted ice rink (along with Chris Corsano as part of Thurston Moore’s Dream Aktion Unit) and eventually formed a duo (Live in Buffalo, 2010, 8mm). Corsano, Nace and Baczkowski toured as a trio in 2012 and released Live at Spectacle (2013, Open Mouth) as a quartet with trumpeter Greg Kelley.

Baczkowski lives in Buffalo, N.Y. where he works as a conduit for creative music of any & every sort. In addition to organizing the Buffalo Improvisers Orchestra, and the Buffalo Suicide Prevention Unit, he also performs solo, in duo with Ravi Padmanabha, Bill Sack, Nola Ranallo & Omar Tamez and in ensembles such as Organ Donor, The 12/8 Path Band, Rey Scott’s Unusually Different, Necrophonia, William Parker Trance Quartet and frequent collaborations with like-souled folks from around the world. Baczkowski first performed with saxophonist Tamio Shiraishi after midnight in the Spring St. subway station in Manhattan on July 13, 2012.

Bill Nace is one of the premiere avant-garde guitarists active today. He has one of the most personal and unique pallets of sound ever to be culled from an electric guitar. Nace creates a distinct, mind-bending cacophony and focuses his textures with intense precision and control. He works under various guises, solo, a duo with Paul Flaherty, Body/Head with Kim Gordon, Northampton Wools with Thurston Moore, Ceylon Mange (with Dylan Nyoukis and Karen Constance) and more.

Tom Carter’s electric guitar work weaves strands of melody, drone, fuzz, and charged silence into intricately detailed instant compositions.
Best known for his work with iconoclastic acid-folk improvisers Charalambides (which he co-founded with Christina Carter in 1991), Tom Carter has focused on solo performances and recordings since 2012. His 2015 double LP on Three Lobed Records Long Time Underground is the final installment of a trilogy begun in 2009 with The Dance From Which All Dances Come and continued with 2014’s Numinal Entry. Long Time Underground was selected as the number-one experimental album of 2015 by The Out Door/ Pitchfork.

You can listen to Tom Carter here.

Aaron Gonzalez plays all kinds of bass, he is a composer, a musical teacher and a performance artist. Elder son of Dennis Gonzalez and older brother of Stefan. Together, the three of them, they are Yeels At Eels (beautiful melodies, explosive rhythm fluxes and bursts of dynamics that borders and passes through countless possibilities in contemporary jazz), with just Stefan they are both Akkolyte (an intense experimental grindcore duo) and both of them plus Gregg Prickett are Unconcious Collective, an avant fusion maximum-power trio. Also with Stefan but adding the extraordinary portuguese guitarist Luis Lopes and saxophonist Rodrigo Amado they have been Humanization Qtet. Lately he has been developing the intense vocal performance solo Deflowered Electric Flesh Bride and, along with Wyatt Rosser, Sarah Ruth Alexander and Stefan sometimes become Asukubus, a haunting, cold blooded and blunt affair.

Stefan González, drummer, vibraphonist and vocalist in The Young Mothers, fronts the one-man grind/death-grind/noise-grind project Orgullo Primitivo. He comes from a serious music pedigree – his father is jazz trumpeter, poet, and visual artist Dennis González – but Stefan has carved out his own unique and original place on the national scene. Born in Dallas, which is his current home base, González is a member of free-jazz trio Yells at Eels (with his father Dennis as well as his brother Aaron), the punk-rooted jazz-rock group Unconscious Collective, and the lone jackhammer of Orgullo Primitivo, which the Dallas Observer calls as “refreshingly skeletal, free from the overwrought decadence that defines so much of Dallas’ ‘experimental music.’” In 2014, the Dallas Observer named González as the city’s “Best Drummer.”

You can listen to Yells at Eels here.

You can listen to Unconscious Collective here.

Bitches Set Traps (or BST) started as a group in 2018 inspired by the Feminist Improvising Group, which was a 5-8 person ensemble founded in 1977 by Scottish vocalist Maggie Nicols and English bassoonist-composer Lindsay Cooper. They were the first ensemble of female improvisers who performed publicly. Their initial intent was apolitical, the group developed an interest in exploring social commentary and political parody and farce, and in challenging taboos on-stage. BST use unconventional “instruments” such as kitchen bowls, a coffee grinder, hair dryers, and assorted other implements of traditional femininity. Both the written piece and the improvisatory one raise questions about gender roles and expectations. Can a person play the cello and vacuum at the same time? Yes, apparently, cellist Kourtney can. But can she do them simultaneously and well? Not really, unless all you want to hear are open strings—perhaps reinforcing that we can do it all, sure, but maybe not all at once.

Flutist Elizabeth McNutt is a recitalist who primarily performs contemporary music. She has premiered hundreds of new works and performed widely in Europe, Asia, and the U.S. Her recordings include the solo CD pipe wrench: flute and computer and tracks on numerous other releases; her writing has been published in Organized Sound, Music Theory Online, and the Flutist Quarterly. Her chamber music activities include the Calliope Duo and the Tornado Project; she is also director of the Sounds Modern series at the Modern Art Museum of Fort Worth. McNutt holds a DMA in contemporary music performance from the University of California San Diego. She is on the faculty at University of North Texas, where she teaches flute and directs the new music ensemble Nova.

Sarah Ruth is a diverse musician and artist – a multi-instrumentalist, she employs hammered dulcimer, harmonium, electroacoustic sound art, and extended vocal techniques. She performs frequently both solo and with multiple bands and improvisational ensembles in the North Texas area. She is a University of North Texas graduate where she focused on vocal studies and electroacoustic composition. She has also studied with Meredith Monk and members of her vocal ensemble. She enjoys varied collaborations and has worked as a sound artist for art and photography installations and an accompanist for modern dance. She tours nationally and her recent albums have been released on Obsolete Media Objects, Pour le Corps Music and Tofu Carnage Records.

Jolene Masone is a unique artist specializing in Contemporary and Experimental music for bassoon. Jolene works to explore and advance contemporary music in Dallas,Texas and bring organizations together through experimental art.  Jolene came to music early in life, begging her parents for piano lessons at a very young age. Due to her competitive nature, and a love of learning, Jolene was placed on the bassoon as a 14 year old, where she found the instrument that she would pursue for the rest of her life. Jolene fell in love with interpreting the music of living composers while pursuing her masters at Peabody Conservatory. While taking classes from David Smooke and Michael Kannen, Jolene found that she drifted toward the more interesting challenges that experimental music had to offer. When pursuing her doctorate at the University of North Texas, Jolene’s main emphasis was on interactive music for bassoon and electronics. Jolene has premiered 17 new works in the past 5 years, and looks forward to many more. Jolene participates as a member of the Ex-Mus Ensemble, the Lone Star Wind Orchestra, the Odysseus Chamber Orchestra, the Caña Trio, and is an active freelancer in the Dallas-Fort Worth area. She can be heard on GIA, Klavier, and Naxos labels on bassoon and contrabassoon. She is also a devoted member of the community, and teaches throughout the DFW area. Jolene attended the University of Northern Colorado, Peabody Conservatory at Johns Hopkins University, and received her Doctorate of Musical Arts from the University of North Texas.

Kourtney Newton is currently pursuing a Doctor of Musical Arts degree in cello performance at UNT where she studies with Professor Nikola Ruzevic. As a fervent supporter of new music, she has been a featured performer at several prestigious festivals and conferences, such as New York City Electroacoustic Music Festival 2018, NY PHIL biennial at National Sawdust in Brooklyn 2016, SEAMUS 2016, International Computer Music Conference 2015, Electric LaTex 2014, New Music on the Point 2015, Sounds Modern Recital Series 2015-present, and Aquilla Contemporary Music Recital Series 2012-2013. Kourtney has also performed with orchestras internationally at venues in Thailand, Austria, Germany and England. She is particularly passionate about improvisation and is a founding member of the Colorado Soundpainting improvisation ensemble. She also enjoys performing as a member of the Amorsima String Trio and UNT’s contemporary music ensemble NOVA.