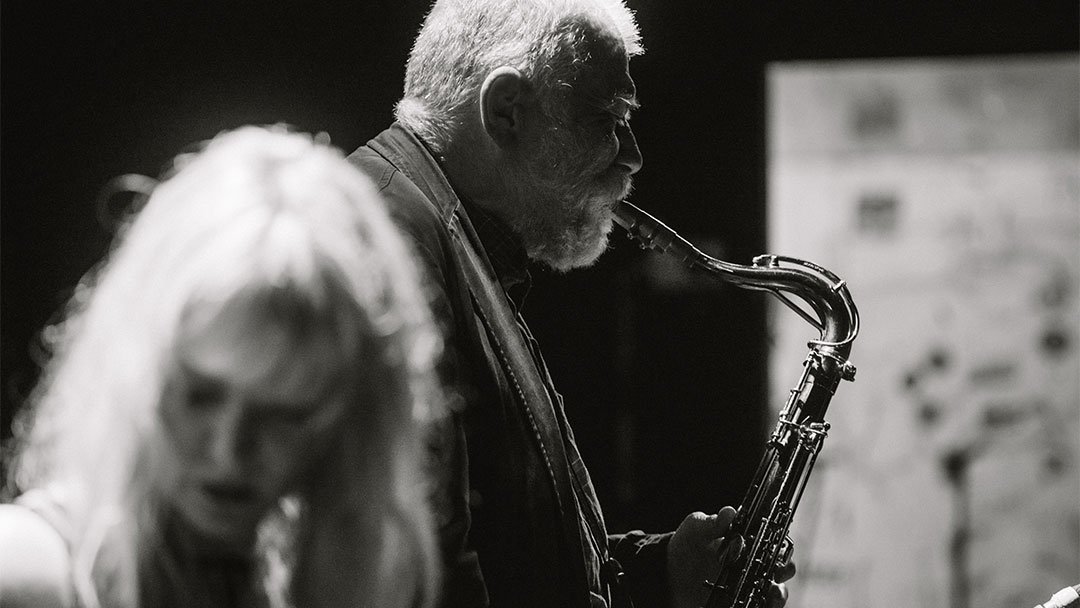 Legendary saxophonist Peter Brötzmann is coming to Dallas for the first time. Join us to experience the controlled rawness of his playing along with the pedal steel of Heather Leigh.

Legendary saxophonist Peter Brötzmann is coming to Dallas for the first time. Join us to experience the controlled rawness of his playing along with the pedal steel of Heather Leigh. Illustrious artists Joe Baiza (guitar) and Jason Kahn (Drums) will open the soirée with their punk infused free improvisation. Come and check out what the outskirts of Jazz sounds like.

Mutarrancho will be selecting mucha buena musica before and between their sets.

Peter Brötzmann
Peter Brötzmann is one of the most prolific and enduring of the free jazz musicians to emerge from the European avant music scene of the 1960s. His rough tone and emotively ferocious method of attack on saxophones, clarinet, and taragato are among the most recognizable in jazz. He has played on literally hundreds of recordings — many of them live — from solo concerts to large ensemble dates and virtually every configuration in between. He is the rare Albert Ayler-influenced saxophonist capable of producing improvised lines of depth and sensitivity while informing them with enough raw power to make a lesser saxophonist wilt.

While recordings of his various trios exist as early as 1964, it is the historic 1967 album For Adolphe Sax with bassist Peter Kowald and drummer Sven-Åke Johansson, on his own BRÖ label, as well as his octet date Machine Gun from 1968 and his membership in the Globe Unity Orchestra that established his bona fides on the scene. His catalogue reads like a vanguard’s who’s who in free jazz and experimental rock. Brötzmann’s playing possesses a surety of tone and a melodic center characteristic of a focused musical conception. While there’s no lack of spontaneity in his music, Brötzmann’s concern with motivic and melodic reiteration gives his playing a palpable sense of direction.

Heather Leigh
The daughter of a coal miner, weaving a trail from West Virginia to Texas and now residing in Scotland, Heather Leigh furthers the vast unexplored reaches of pedal steel guitar. Her playing is as physical as it is phantom, combining spontaneous compositions with a feel for the full interaction of flesh with hallucinatory power sources. With a rare combination of sensitivity and strength, Leigh’s steel mainlines sanctified slide guitar and deforms it using hypnotic tone-implosions, juggling walls of bleeding amp tone with choral vocal constructs and wrenching single note ascensions.

Since 2015, Brötzmann/Leigh have established themselves as a formidable duo, touring extensively and electrifying audiences with their singular, dynamic group sound. Together they bring countless decades of experience at the cutting edge of ferocious speed-of-thought improvisation and deep lyrical soul.

Joe Baiza
Joe Baiza (1952) is a punk rock and improvising guitarist whom Eugene Chadbourne cites as one of the most noteworthy guitarists to emerge from the Southern California punk rock milieu.Baiza is a founding member of the bands Saccharine Trust, Universal Congress Of, and The Mecolodiacs. He also performed guest guitar spots on several Minutemen tracks and played alongside Black Flag’s Greg Ginn and Chuck Dukowski in the SST all-star jam band October Faction, recording two albums with them. Baiza was also part of the musical side project Nastassya Filippovna which featured Bob Lee (drums), Devin Sarno (bass) and Mike Watt (bass).

Baiza substituted for Nels Cline during Mike Watt’s European and American tours behind his second solo album, Contemplating the Engine Room, in 1997 and 1998. Also in 1997, he and Cline played (sometimes together) in the band Solo Career with Lee (drums), Richard Derrick (bass), Walter Zooi (trumpet) and Gustavo Aguilar (percussion). Currently, Baiza plays with Saccharine Trust as well as the improvisational unit Unknown Instructors with former Minutemen Mike Watt and George Hurley.

Jason Kahn
Jason Kahn (born 1960) is a musician, artist and writer. He was born 1960 in New York and grew up in Los Angeles. In 1990 he re-located to Europe and is currently based in Zürich. Working with drums, voice, guitar and electronics Kahn collaborates regularly with many musicians in projects which blur the edges between improvisation, electronics, noise and rock.