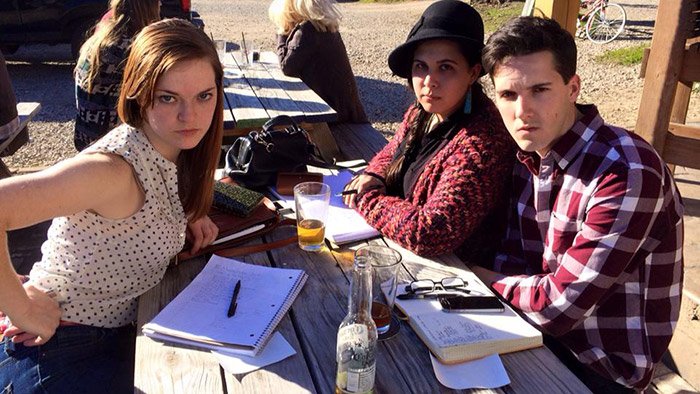 Katherine, Alia and Dylan in the Bar

WD – How merry/tipsy/drunk?
KB – Our job is to tell a story, and to be in a state of mind that can, first and foremost, tell that story to an audience. For some people, that means staying away from alcohol all together- for others, they can handle taking shots onstage (if it fits their character, of course)! For this reason, we make sure to use actors that are both fun-loving, and also there to make the story of the play their first priority.

WD – Does your warming-up exercises involve some drinking too?
KB – We will definitely “cheers” to the show. Honestly, our warm up includes frantically running lines, blocking sections we didn’t get to, and enjoying a beer or two to stave off the nerves, if you want.

WD – There is very little preparation time for each play. You just spend enough time to memorize it all, but almost none to rehearse. You would think that drinking wouldn’t be the wisest thing to do to perform an unrehearsed play. What does being in a bar add to the performance?
KB – The main event really isn’t the onstage drinking- the fact that alcohol is available to us is something we utilize along with other aspects of being in a bar… The ability to stand on the tables, to break the rules a bit, to shove off the need to be perfect. I do think that the fact we are in a bar takes away the preciousness and pretension often associated with Shakespeare, which loosens up the audience a lot. In a bar, people feel free to laugh and to listen with an open mind, which automatically makes the language more accessible.

WD – What goes through your mind while you’re performing SITB? How does it feel?
KB – I think it is different for every actor. Given our short rehearsal time, all of us are definitely working out our characters as we go, which is so fun to watch. I feel so happy when an actor makes a discovery that works in the moment. The goal is to respond to what is really happening onstage, which takes openness and concentration… And a willingness to mess up. It’s a constant exercise in taking your work seriously, and also seriously getting over yourself.

WD – In your plays the stage isn’t defined and you don’t wear costumes. It seems like there is no clear division between audience and crew. How do you guys manage to get into character?
KB – The audience is an essential part to our characters- they are each character’s best friend and confidant. We don’t play like the audience doesn’t exist (the 4th wall)… We talk to the audience, constantly try to get them on our side- they aren’t a distraction, they are essential to getting into character!

WD – Now tell us about you guys. How you knew each other and how did you come up with this crazy idea?
KB – Dylan, Alia and I were friends and have all collaborated together before… Alia and Dylan are great enough that when I came to them wanting to make this happen, they responded with “yes, AND” rather than with apprehension.
Doing Shakespeare in bars is actually really on the rise right now! This is a great article all about it.

WD – How do you work? What is the process involved in preparing the shows?
KB – We have a couple readthroughs as a cast, one staging rehearsal and then we perform! Everyone should be memorized, but during the performance we are allowed to call “Line!” If we get totally lost… And then the audience drinks for us.

WD – Who are the people that you invite to collaborate?
KB – Local actors we’ve worked with before and have relationships with, or have seen perform before. People who are team players, who we know will do their work and show up ready to play.

WD – And why Shakespeare?
KB – Shakespeare is beautiful, naughty, hilarious and tragic. It is easy to feel like Shakespeare is a dead language telling stories that are no longer relevant, thanks to a lot of our highschool English classes. This could not be further from the truth. Shakespeare was also written in a time when the act of going to the theatre was very different… The audience drank and stood up for four hours, and Hamlet probably looked them right in the eyes as he said “to be or not to be”. The language really comes alive when we speak it in this new (old?) setting.

WD – Would you consider other authors?
KB – Definitely! This all feels like a big experiment, and I would be curious how other authors are recieved.
Shakespeare in The Bar will perform Much Ado About Nothing, next Monday at 9pm. Doors open at 8:00 pm and we are capping the audience once we reach capacity, so get there as early as you can!