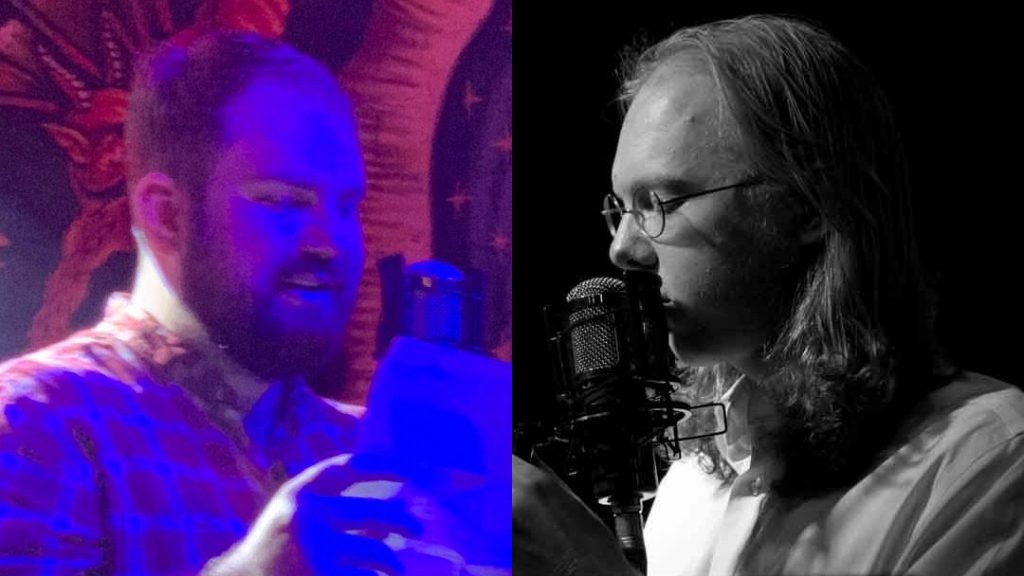 Logen Cure: You say you used to be a singer-songwriter and poet before finding your voice in short fiction. Can you tell me more about that journey?

Harry McNabb: Being a singer-songwriter is something that is very dear to me. When I was in high school it became an outlet for a lot of the difficult emotions I experienced around that time. I was painfully shy and awkward and playing guitar gave me a way to be confident in my interactions with people. Poetry came about later in high school. I read some Richard Brautigan, E.E. Cummings, Charles Bukowski, and Allen Ginsburg, and I thought that that was something I’d like to do too. I was really awful at it, but I liked giving words to my emotions. I was really into this one girl in high school, and she recommended that I post poetry to a website called DeviantArt.com. I posted poems on there chiefly to impress her and get her to like me, but she didn’t really like what I did. Still, I was so enthusiastic about poetry that I got into posting regularly and making friends with other writers online. I wrote hundreds and hundreds of poems and posted them on that site. I was even published there a couple of times through the message board Daily Literature Deviations, and once the more prestigious Daily Deviations, where hundreds of people saw my poem, “Oh Woe, Cotton Candy On Fire.”

Still, I’m not a very good poet, but I credit the practice of writing poetry as giving me discipline as a writer. When I graduated from high school, I found the poetry open mic scene. I only played songs though. I wasn’t confident as a poet, even though I liked poetry more. I went to college after a year of performing regularly, and due to some pretty awful life events, I couldn’t go back there. Still, that year of studying creative writing and getting exposed to a wide variety of stories and novels began to tilt me away from poetry towards fiction. In the succeeding years, I wrote an autobiographical novel, and some stories, and although I began reading my poetry at open mics too, I found that I got better reactions from people by reading prose. People understood what I was trying to communicate better.

That’s the thing about poetry: it’s more difficult to understand, especially for an inebriated audience who don’t want to work to enjoy themselves. Reading my work to an audience has taught me a lot about the craft. I’ve learned how to entertain people. I’ve learned what people like and don’t like. I would encourage every writer to read their work in front of an audience of strangers. It’s a great test for figuring out how effective your writing is. I still love poetry and songwriting. A couple of years ago, I made two avant-garde punk albums. I’d still like to release a poetry collection at some point, though I’m busy culling together a novel, and another short-story collection.

LC: Vacuum Stories is such an unusual title. I can think of a few different ways it could be interpreted. What’s the story behind the title?

LC: What’s the story behind “Stay strong, little fruitcake!” on the back cover of the book?

HM: I thought, rather than have quotes on the back of the book saying how great I am, that the space would be better served as platform for me to convey a message to the reader. If you like my stories, you’re probably a little weird, so I wrote “Stay Strong Little Fruitcake,” as a message to those weirdos. Being a “fruitcake” is tough. Seeing that message is something I’d appreciate as a buyer of books. In the end, it’s an aesthetic choice. Like, you just have a vision and that detail was part of the vision. I don’t know. I hope it provides comfort and enjoyment to whoever looks at the back of the book

LC: Your stories are so bizarre and funny. Who are your influences in terms of humor?

HM: Well, let’s see. As far as literature goes, I was first exposed to literary humor when I read Kurt Vonnegut and Richard Brautigan in high school. Breakfast of Champions and The Hawkline Monster were my favorite books by those authors. I remember reading The Hawkline Monster and thinking, “I want to do THAT.” Anything can happen in their books. Their style is also very deadpan and I totally rip them off in that regard. A lot of people have told me that my style is very unique, but I think that if they read those two guys, they’d think “oh, that’s where it comes from.” Also, it’s because of them that my writing often has a surrealistic flourish.

Apart from Brautigan and Vonnegut, my literary influences as a humorist are Franz Kafka, Haruki Murakami, David Foster Wallace, Tao Lin, and Donald Barthelme. I’m also influenced a lot by British sitcoms. I was raised mostly by my mother, who is British, and because of her I ended up watching a lot of British TV. I have watched Father Ted, Blackadder, Fry and Laurie, Absolutely Fabulous, and Red Dwarf over and over again for years and the episodes are ingrained in my memory. Unlike American comedy, classic British sitcoms are all about wordplay. A lot of the humor comes from the script. They’re writer’s shows. So, in terms of timing and wordplay, I’ve learned a lot from them, specifically Ben Elton, Richard Curtis, Dawn French, Jennifer Saunders, Doug Naylor, Stephen Fry, Hugh Laurie, and Graham Linehan. Some American TV shows are also inspiring to me, though I came across them much later.

Apart from all those influences, part of the humor in my writing comes from me. A lot my writing is very autobiographical, and I often use embarrassing, devastating, and depressing events from my own life in a humorous way. I used to be quite serious and sensitive, but over time, I’ve learned how to laugh at myself. There’s a lot of funny things about me that I didn’t find funny for a long time. I have a lot of quirks and have done a lot of stupid things. We all have.The thing I love about writing, more than anything, is the fact that you can redeem bad experiences by making art out of them and sharing it with other people.

LC: Tom, tell me about Free Tongue Press. What was the impetus behind starting it?

Tom Farris: I began Free Tongue Press as a way to give back to the poetry communities of Dallas, Fort Worth, and Denton, all of which played a part in helping me recover from the tragedies of my life and grow as a person, poet, and musician. And since I’ve started it, other presses have begun to publish local poets, which has made me wonder what Free Tongue Press means as a press and an identity. One time I was in a coffee shop with Joe Milazzo, and he was telling me I need to write a manifesto for Free Tongue Press. I haven’t written that manifesto yet, but if I had by now, it would involve something like this: Free Tongue Press publishes authors who have the daring to be truly strange, and who make people feel feelings they couldn’t feel from anything else.

LC: Making choices as an editor is incredibly difficult. What drew you to Harry’s work in particular?

TF: I was drawn to Harry’s book because I heard his stories at a few open mics and they had this oddly wonderful mix of being something from a far-away place that’s so close to home. Harry’s stories are like fables that dance around pools of meaning and relatability in the most fascinating of ways, like tiny minnows attempting to send a message of comfort to you while traversing a clumsy, awkward world.

Logen Cure is the author of three poetry chapbooks: "Still," "Letters to Petrarch," and "In Keeping." She's an editor for Voicemail Poems. She serves as an English faculty member at Tarrant County College and earned her MFA in Creative Writing from the University of North Carolina at Greensboro. She curates "Inner Moonlight," a monthly poetry series at The Wild Detectives. She lives in Dallas with her wife and daughter.