The Wild Detectives dedicates March to conversations about development in Dallas. Introducing “Gentrified Dallas: A Month-long Investigation into the changing city.” 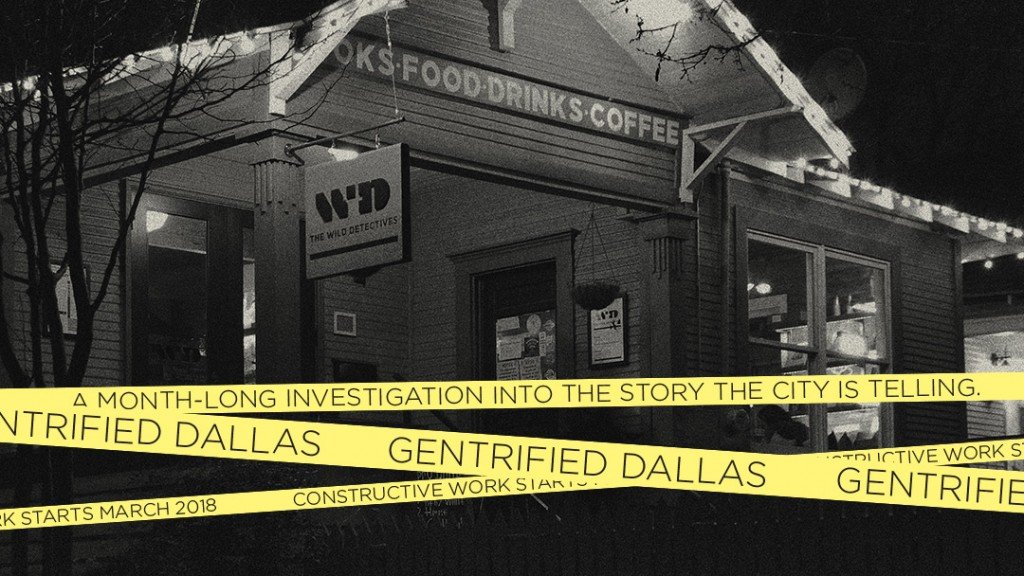 The Wild Detectives dedicates March to conversations about development in Dallas. Introducing “Gentrified Dallas: A Month-long Investigation into the changing city.”

Gentrification has become a controversial buzzword in recent years. Like most language, who’s using it and how it’s used can make all the difference. Some people define it as real estate development meant to attract bearded, hat-wearing hipsters with expendable income; for others, it signifies the displacement of entire generations or cultures or socioeconomic groups.

In Dallas, the rapid development of neighborhoods is impossible to ignore – particularly in Oak Cliff’s Bishop Arts District, where The Wild Detectives set up shop four years ago. As a way to acknowledge the shop’s role in the changing neighborhood, we’ve dedicated the month of March at the shop to topics of gentrification, urbanism, equity, and development.

I teamed up with Dallas Morning News architecture critic and UTA architecture professor Mark Lamster to curate a series of lectures, panels, and discussions during the month of March that will provide a platform for conversations about the changing city.

One of the things I love about working with The Wild Detectives is that they don’t shy away from difficult conversations, even if it means critically examining their own effects on a place. Since the shop’s first day, the block around us has changed drastically and we thought it was important to confront the implications of that head on.

Lamster was a natural collaborator for the series, as he focuses much of his writing for the Dallas News on the aesthetic and practical implications of real estate development in Dallas.

“Do we want to shape our city or do we want it to shape us?,” Lamster asks. “Right now, Dallas is changing rapidly and dramatically, and that means we need to talk about the implications of that change, both good and bad, so we can understand how to manage it. That’s not an easy job, but I hope the inspiring voices in this series can point us in some productive directions.”

For The Wild Detectives co-owner, Javier Garcia Del Moral, bringing new voices to these conversations is the duty of a bookstore.

“We have many reasons to be part of the conversation: as neighbors we are located in one of the epicenters of Dallas gentrification (North Oak Cliff),” Garcia Del Moral says. “As a business, we are part responsible for the gentrification of our own neighborhood, and as a bookstore is our duty to bring controversial issues to our community, invite people that have spent time studying those and facilitate a conversation that helps all of us understand the underlying problems better.”

7:30 p.m. Thursday, March 1:
How Dallas Artists Wrestle with Gentrification
The series will start with a conversation with local artists and organizers Tamitha Curiel, Rafael Tamayo, Giovanni Valderas, and Montoya Williams about how artists view, resist and respond to gentrification. Other conversations.

7:30 p.m. Thursday, March 22:
A Changing West Dallas: One Documentarian’s Journey to Capture Stories of Displacement
Victoria Ferrell-Ortiz, documentarian who is capturing the stories of displacement in West Dallas, will be in conversation with some of the subjects from her upcoming documentary, Wela.

Gentrified Dallas: A month-long investigation into the story the city is telling is curated by Mark Lamster, architecture critic at the Dallas Morning News, in collaboration with University of Texas at Arlington’s College of Architecture, Planning and Public Affairs.