Indrė Jurgelevičiūtė, a Lithuanian folksinger and songwriter, creates melodies that honor the traditions of her country. With the kanklės, a Baltic psaltery instrument, laid out horizontally across her lap, the musician paints fresh musical landscapes. 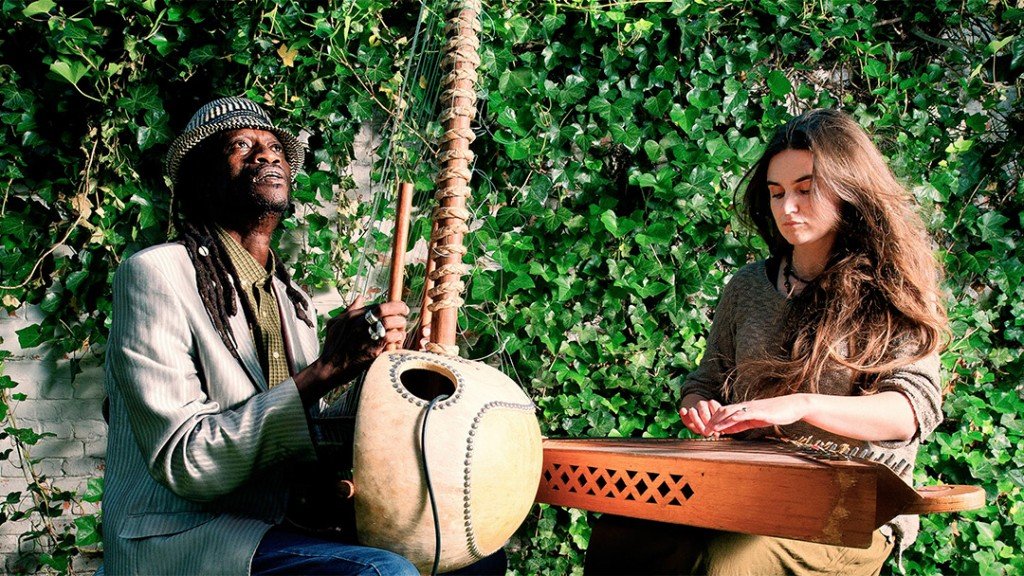 Indrė Jurgelevičiūtė, a Lithuanian folksinger and songwriter, creates melodies that honor the traditions of her country. With the kanklės, a Baltic psaltery instrument, laid out horizontally across her lap, the musician paints fresh musical landscapes.

Through her collaborations with Senegalese musician Solo Cissokho, Lithuanian and Senegalese folk melodies blend with spontaneous improvisations to create a haunting flow of acoustic sound. The musicians say that it is the music itself that decides where they go once they put their tunes together and weave them into a single musical story.

“We have to catch the spirit together and go. We create our own atmosphere,” Indrė says. “Solo always says that you should never put pressure on music because then the spirit goes away. If you let the mind rest a little, more things can come. There’s more space for things to happen. You just listen, and by listening you learn a lot. Because our musical heritage is quite different, I can learn a lot from Solo.”

The Senegalese musician plays kora, a string instrument from West Africa. As a griot—a special performer, storyteller and praise singer who transmits his African heritage through music—Solo addresses social issues through his vocals. Griots frequently compare their work to an ancient baobab tree or a library—a living, speaking testimony to a society’s history. Indrė, on the other hand, puts to music traditional Lithuanian folk tales about nature and the connections with dreams and human life; the tradition tells that the soul of a person can live in the kanklės, or that it’s like a boat for a soul to travel from one world to another.

Their song Manssani – Bitele captures this blending of traditions. Indrė sings “Oh dear bee, are you not afraid to fly alone in the field?” while Solo tells an old legend about a king who stole a poor fisherman’s wife. “Almost all the lyrics are traditional, but we change the melody a lot. Or, Solo and I compose the lyrics ourselves but always with a sense of tradition,” Indrė says. The interlinking, complementary patterns of the kora and kanklės form an instrumental narrative as interesting as the linguistic one.

“I’ll start a song, and if a song seems to fit, Solo will join. There’s a lot of improvisation in between the singing, with instruments. Sometimes one of us stays in a certain key and the other switches. Then we’ll look at one another and somebody starts to sing. For me, it’s important to keep the core—the Lithuanian one—but to keep this open so other influences can come and go. We [Solo and I] just try to be ourselves and not to change each other, but just to blend how we are,” Indrė says. The goal is to maintain a sense of identity and then come together, without the loss of authenticity. “Maybe this is what people feel when they listen to us,” she says. “That you should carry who you are while being open to the other.”

This openness works in establishing connections with audience, too. “Sometimes the audience is huge, but you create these intimate moments with them. Audience is an equally important part of the concert. If they listen, you can catch some kind of moment together. It doesn’t matter the place, it’s always the people. Maybe I’m a little introverted, but through music I can be the most open to others and that’s really nice.”

Emerging from a Vilnius recording studio in 2015, Solo & Indrė, the duo’s first album (produced by One Root Music and supported by Granvat) yielded international praise, in part due to its originality; this is the first meeting of the kora and kanklės. (Just days ago, the album reached a million views on Youtube).

“We recorded this album during our first meeting in a studio. We thought we’d just record and see what happened. We just met by playing. It wasn’t our plan to record an album in the beginning. We more played than talked with each other. It was very organic,” Indrė says. According to the reviews in the Songlines and fROOTS world music magazines, the unlikely mix of Baltic and West African folk styles is steeped in real musical communication far from an imposed fusion. The string sounds intertwine so organically that it is difficult to see where one ends and the other begins.

Perhaps we can all understand emotion without lyrics

When I stumbled across Solo & Indrė last year, I had no idea what the lyrics meant, yet I was drawn, almost inexplicably, to the rich melodies. It was a kind of intoxication. Indrė offered a reason why this might be so: “Perhaps we can all understand emotion even without lyrics. Sometimes lyrics can close you in your own kind of story,” she says. But when you’re not limited by semantics, sounds and emotions start to lead in the purest possible way. “In the concerts we like to tell the stories from the songs, but even without this you can feel the rhythm and dynamics of each language. The phrasing often delivers the meaning unconsciously.”

In addition to her collaborations with Solo, Indrė has also been performing and recording with other international collectives. As part of the experimental world music band Merope, which released its third album in Spring 2018, she appeared on stage at the Art and Culture festival held in Beijing, China, and played in India’s largest city, Mumbai.

Every year, Indrė travels to India for one or two months because she has music teachers there involved in the Indian classical tradition, where improvisation is key. She’s also releasing new records by two other musical collectives, the Belgium-based early music ensemble ‘Ratas del Viejo Mundo’ and the ambient/improv project Book of Air. In addition to these collaborative projects, Indrė is working on her debut solo album Namopi, where she freely approaches traditional Lithuanian songs. “I like to keep the arrangements open, to let it breathe. For me the tradition is like a flowing river. The most important thing is to keep the spirit of the song.”

In order to create, Indrė realizes a constant need for deep involvement in her craft. “What we play is quite simple, in a way. You need to be honest and sure of what you’re saying because only then will it turn into something, but this only happens if you are everyday in it. Then it’s your life, it’s what you do, and that’s the music,” she says. “You can be tired the moment before you start playing, but when you do it, it’s always nourishing. I really love this life I have through music. The people you meet, the places. People give this time to me, and I hope to fill it with something good.”