“Medicine is my lawful wife; literature is my mistress,” wrote Anton Chekhov, describing his life as both physician and writer. 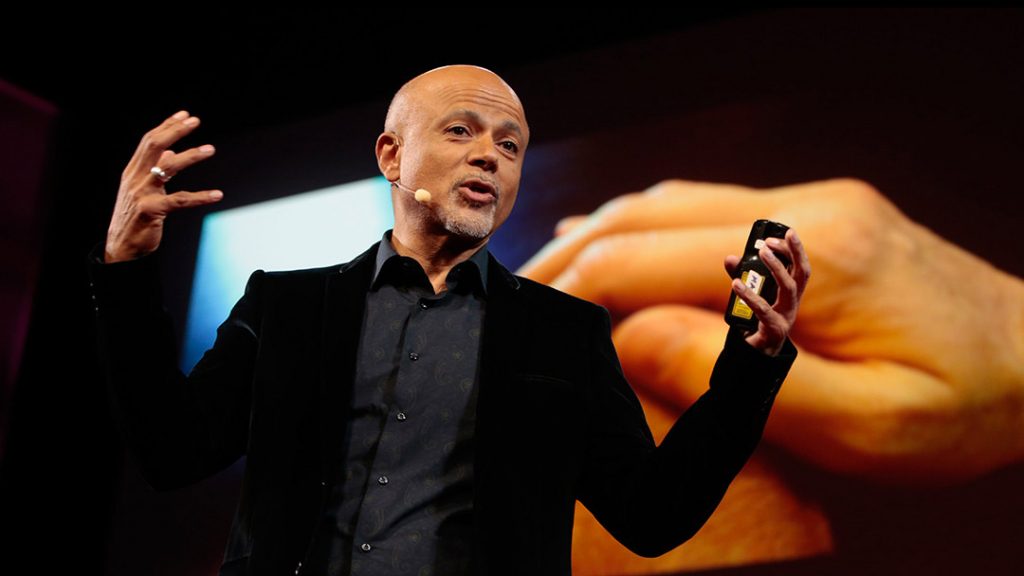 “Medicine is my lawful wife; literature is my mistress,” wrote Anton Chekhov, describing his life as both physician and writer.

There is human drama in both medicine and literature and within these seemingly disparate worlds lie a range of possibility inherent in human life. Besides Chekhov, many other physician writers have held to this medical-literary connection: Hippocrates, Arthur Conan Doyle, William Carlos Williams, Oliver Sacks, Abraham Verghese, to name just a few.

Before Abraham Verghese rose to prominence as the author of Cutting for Stone, his first novel which remained on the New York Times fiction bestseller list for over two years, he was a young infectious diseases doctor dealing with an unprecendented AIDs epidemic in rural Tennessee.

His memoir My Own Country (1994) is a product of that experience, and it was chosen as the first read of the Aggie Book Club. As students at Texas A&M University, my best friend Bhavini (now a preventive medicine physician at the Centers for Disease Control and Prevention) and I founded the university book club as a way of uniting students with a passion for the written word and for community engagement.

Our book club drew many premeds wishing to escape their science textbooks and understand the many worlds they might encounter in future patients. The group also attracted international students hoping to improve their English. At the time we read Verghese’s first memoir, he was director of the Center for Medical Humanities & Ethics at the University of Texas Health Science Center San Antonio. I emailed his secretary and arranged a call via speaker phone (this was before the time of skype) so that our members could ask Verghese questions about his book, his life and training.

My Own Country deals with caring for a seemingly unending line of young AIDS patients in a time when little could be done other than help them through their early deaths. Long before retrovirals, this was often the most a physician could do, and the experience taught Verghese the subtle difference between healing and curing. We could hear it in his voice: Abraham Verghese understood the power of empathy, of listening, and telling the truth. He stressed over and over the lasting lessons in healing when there is no cure. “But what does that even look like?” one of our members asked.

Narrative offers an entry into experiences we’ve never had

Verghese expressed his fear that he would become mute if he ever left medicine and tried to write. “I think that medicine is very much a calling, and writing is equally a calling quite wrapped up in the same sentiment that brings me to medicine,” Verghese said. He told us that he was interested in how narrative offers an entry into experiences we’ve never had, and the implications this might have for physicians. How such participation might change us as individuals.

Today, as an internist at Stanford University, Verghese spends a lot of time listening carefully to people’s stories and trying to immerse them in his repertoire of stories. He studies the body as text. When you come to see a physician, he says, there is story in the sense that the 3 D’s of drama are there: Drama equals Desire plus Danger. When you go into a physician’s office, you may receive the news of your life being altered or shortened; there lies the danger. There is also the desire to walk out of there with a clean bill of health. So, according to Verghese, stories are very operative in the medical world, when it might not be at other times in a person’s life. “It’s very important for the physician to be aware of the sense of story, and the need for resolution of the conflict,” he says. Patients offer stories and physicians must locate meaning in those stories to try and change the plot for the better.

On another level, it’s important for physicians to appreciate things like metaphor, and to be able to appreciate the fact that the language patients use, a very personal language, is rendered into the formal language of medicine. When Verghese talks about writing and medicine to medical audiences, he’s always trying to point out how much we’re living in a world of story, how much physicians should seek epiphanies to the patients’ stories, and how when doctors have a discomfort with the patient, it’s because “the epiphany doesn’t seem to be at hand and is resisting them, and in understanding that, perhaps, is the epiphany,” he says. “The recognition that you can’t change the medical thing, but you can begin to change everything else about the way the patient is seen.”

Danielle Ofri, an essayist and practicing internist in New York City, says that story and character are so much a part of doctors’ daily lives. “That’s what gives us meaning in what we do,” she says. Doctors talk fast, think fast, write fast, and move fast. They juggle things at such a rapid pace that there usually isn’t enough time to reflect on what happens. Writing is a way to spend some time. “If you don’t place it somewhere, settle things, it’s hard to move forward when things are still rattling around in the brain space. There’s a lot of intensity. Writing is a way to negotiate it all. You can go back and keep revising if you want, until it settles,” Ofri says.

Medicine and literature share a kind of synergy in that focus on character.

William Osler, a Canadian physician who created the first residency program for specialty training of physicians, wrote that “it is much more important to know what sort of patient has a disease than what disease the patient has.” Medicine and literature share a kind of synergy in that focus on character, and so being a writer can only be beneficial to the work of a physician. It works to deepen engagement with the big questions of life, which are the ones patients are often struggling with themselves.

Doctors can grow to appreciate the salient features of so many other stories every day and use those stories to explain to each patient how they imagine them finding a way through their illness. In her book on Ovid’s Metamorphoses the writer and mythographer Marina Warner said of stories, “they offer a way of imagining alternatives, mapping possibilities, exciting hope, warding off danger by forestalling it, casting spells of order on the unknown ahead.” The same could be said of medicine. When one reads Chekhov, when a doctor “reads” his or her patient, they each can gain the sense that time and frailty is so much a part of human existence that it inspires a depth of compassion one can only dream of and constantly reach for.

With the knowledge that stories and medicine go powerfully hand in hand, Perri Klass, Professor of Journalism and Pediatrics at NYU, created a program called Reach Out and Read in 1989. Klass’s idea was that pediatricians make ideal conduits for the message that reading is important, as 96% of children under five years old see their doctor at least once a year, and the opinion of a physician can sometimes carry more weight with parents than that of a teacher or counselor.

Taking advantage of this privileged position, a growing number of pediatricians are “prescribing” books to their young patients at each visit, some even writing the directive to read on a prescribing pad. It’s the idea that health encompasses both strong bodies and strong minds, and that literacy promotion forms a key cornerstone of pediatric care, especially during these early years of brain development.

To date, the program has distributed millions of books through its medical partners, as each enrolled child gets a new, age-appropriate book at every well-child visit, from six months to five years of age. That means they’ll start kindergarten with a home library of as many as 10 books—sometimes the only books they own. “When we give these books to our young patients, when we encourage parents to read with them and trust in the power of that time together,” Klass says, “the power of that interaction, that back and forth . . . can help children find their voices, write their own stories and that can change the world.”

Dr. Meg Marino, a pediatrician and children’s book author in New Orleans, embodies the mission of Reach Out and Read. Marino’s first picture book Chepecho and Her Clippity, Flappity, Floppity Friends (2018) has been distributed through her own hospital’s program. The idea for Chepecho emerged during Marino’s travels in Italy, where she kept seeing artistic representations of a creature that had hooves, wings and a fish tail. “I first noticed it in the Trevi Fountain in Rome, and then I noticed it in a ton of sculptures and mosaics and paintings and suddenly I just thought, ‘well, obviously, that’s a chepecho!” she says. Having studied French and Spanish languages at university, Marino easily combined the French, Spanish and Italian words for bird, horse, and fish into the name Chepecho.

The news of the Charlottesville car attack came at about the time Marino sat down to pen the story, which inspired her even more to write a book about love and acceptance. “Because Chepecho is a little bit like all of the animals, she can bring them together. The other animals only see their differences, but Chepecho teaches the horses, the birds and the sea lions that they don’t have to be afraid of each other,” she says. “My best friend and I are very different. She’s a devout Muslim, keeps her head covered and prays 5 times a day. I’m Jewish, not very religious, and live in New Orleans. But we’re both pediatric subspecialists taking care of critically ill kids. I said to her, ‘I wrote this story, and it kind of reminds me of us. About how we’re so different but still close friends.’”

Quite serendipitously, Marino’s best friend shared the story with her mother, who happens to run a children’s book press called Mayaseen Publishing. Project Peace, part of Mayaseen Publishing, translates their children’s books into Arabic and other languages and then donates the books to refugee children and children affected by war. One thousand copies of the initial printing of Chepecho and Her Clippity Flappity Floppity Friends are going to such young people.

“Something I’ve enjoyed recently is reading books that immerse you in the everyday life of a family in another culture. I started a book club no too long ago, and we just finished Unaccustomed Earth by Jhumpa Lahiri,” Marino says. “The more we learn about others, it helps us be more compassionate people—better doctors, better friends, better members of our society. Literature and reading in and of itself is important, but finding ways to write and communicate with other people helps me be a better doctor.”