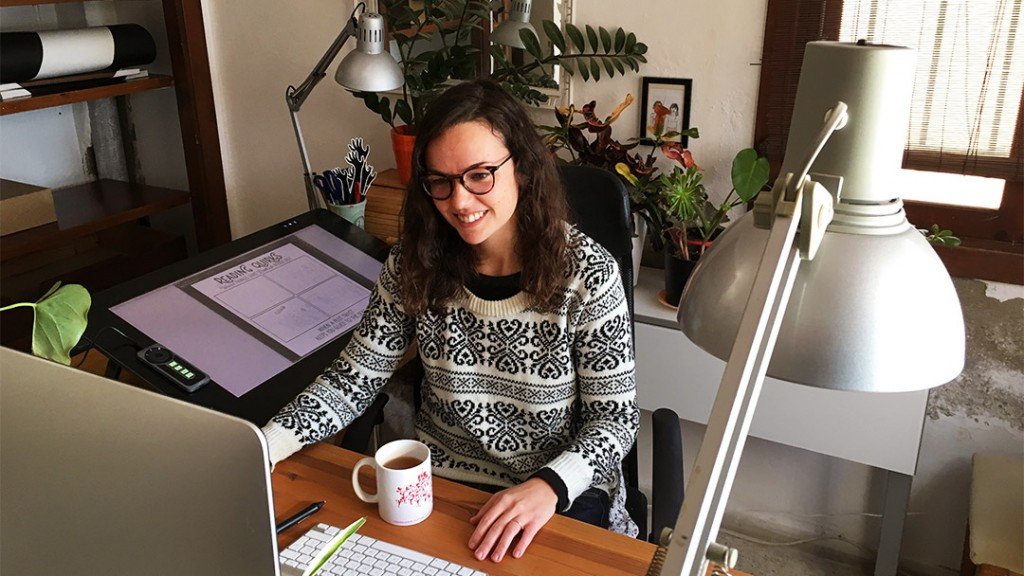 Laura Pacheco at her studio. Photos by Katy Dycus.

On a sleepy street along the southern coast of Spain, buganvilla vines hang in a riot of fuchsia.

From the entrance to Laura’s whitewashed home and through its interior lies a steady stream of plants large and small. Even the studio feels more like a botanical garden than a work space. Fresh and atmospheric. When I come to visit, Laura and her husband are in the middle of a move; it takes them several trips to transport all of their beloved green pets to the new house.

Everything is in full bloom here in Almería. In fact, the region builds its economy around vegetable production, with 100,000 acres of greenhouses, supplying much of Europe. Like the buganvilla—draped around the front porch in heavy curtains—Laura’s art thrives on the guidance of an imagination as bright and steady as the Andalusian sun.

At one point, Laura thought she needed to live in a city like Madrid or Barcelona to meet other artists and attend conferences. “I mean, I still feel that way sometimes, but now I think it’s much more important to have a lot of followers.” Even more important, a creative curiosity, which Laura has in abundance.

I really had no idea that I could dedicate my life to drawing comics.

“I was always drawing when I was younger,” Laura says. “I went to Madrid to study Bellas Artes, but I wasn’t interested at all in comics then. I started to study restoration of paintings. After I graduated, I worked for two years doing restoration in Zaragoza.”

But then came a period of hardship. Laura found herself unemployed. She searched for internships in Europe and attempted to study restoration in Boston, but nothing worked out. “I returned to Almería. I had to move back in with my parents, and it was challenging. But I started a blog and started publishing comics daily,” Laura says. Producing art takes courage, and one isn’t born with courage but develops it by doing small courageous things. For Laura, these things include showing up to her desk day after day.

Much of what Laura does is self taught. “I studied fine arts [bellas artes] at university, so I learned how to draw a statue, but I didn’t study Photoshop or technology at all. So for me, it was a real challenge to start things, like the blog. And when I started it I had no idea anyone would ask me to publish for a magazine. I really had to learn all the technical aspects very quickly,” she says. Her efforts paid off. Over the past 6 years, Laura has collected clients such as Google Spain, Intel, Aquarius, Kia Motors, Ron Barceló, El País, Editorial Planeta, Penguin Random House, and SM Editorial. 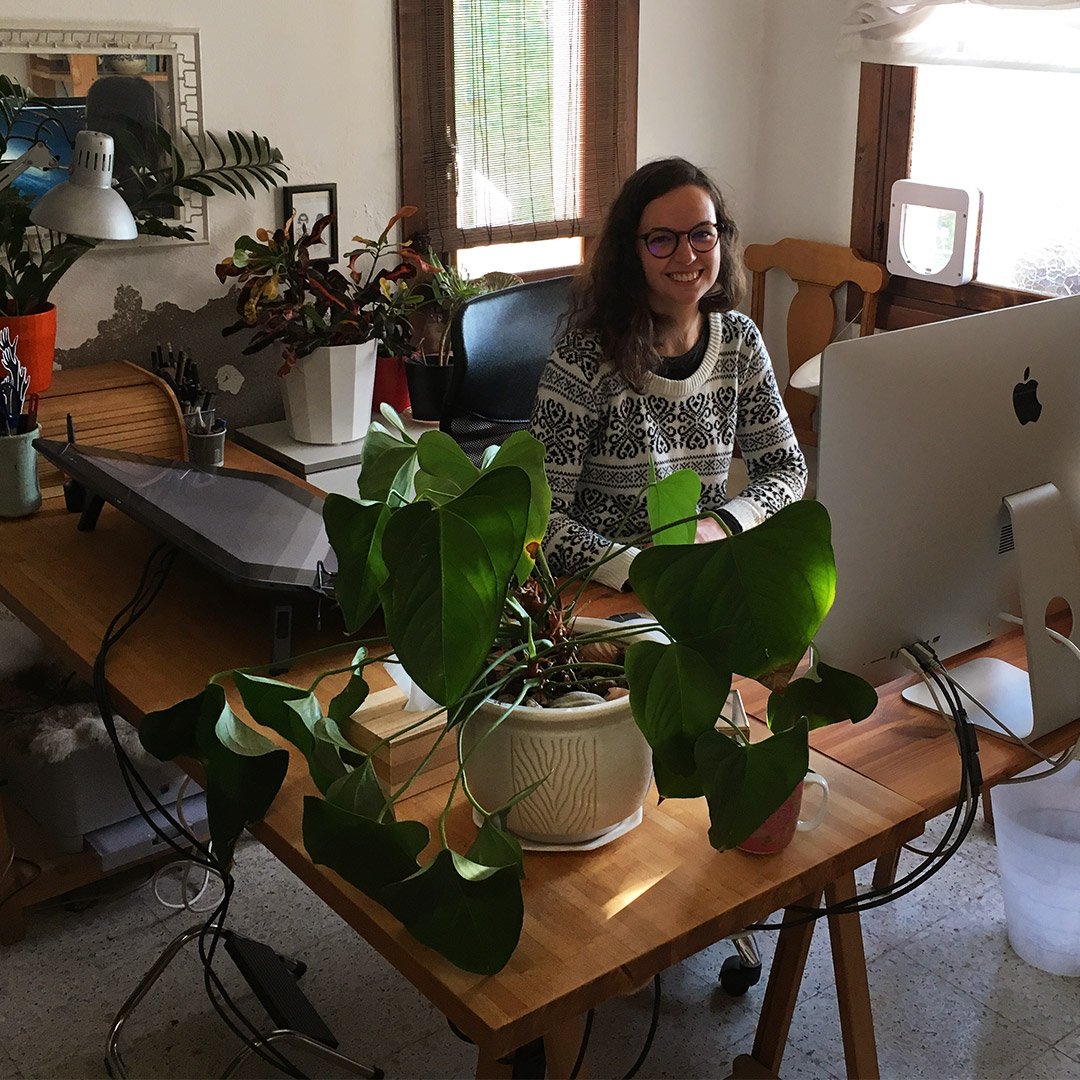 When Laura moved back home to live with her parents in 2011, family life provided the material she needed to create her first book Let’s Pacheco: una semana en familia (originally published in 2011 by ¡Caramba!), an autobiographical graphic novel co-created with her sister Carmen about their yearly Christmas family reunion. Carmen wrote the text while Laura illustrated. They would collaborate again on the book La verdad sobre la Vieja Carola (Ediciones SM, 2012), which tells the story of a young boy named Marcos who strikes up an unlikely friendship. 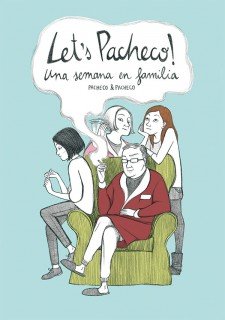 Laura’s next book Señor Pacheco: Agente Secreto (originally published in 2013 by ¡Caramba!) is a comic book co-created with her father, “el señor Pacheco,” with the two of them posing as secret agents who embark on a mission to North Korea. Laura’s father had already retired by the time she moved back home, so her first stories were about him. “He was really a character,” she says. “Specifically, with this project I was sharing the things my dad said or did that were not common at all, but I a

lso wanted to do the exact opposite—convey something that everyone has experienced.”

Which reminds me of Maya Angelou, who once said her success as a storyteller comes from “seeing us as more alike than we are unalike.” In that sense, we are all connected to one another and to the stories we tell. Laura’s stories come from a singular place but express relatable truths, as in her relationship with her father.

Sadly, Laura’s father passed away 2 years ago, so these projects are even more special because of that. Señor Pacheco was written with her father and an experiment in “meta-fiction,” while Let’s Pacheco contains autobiographical elements based on events involving her parents and sister. “These first projects were very personal.” Laura says. “I really had no experience, so I was just experimenting and was starting to draw again. I hadn’t ever written anything. I’d never written comics. I was really just experimenting. So now when I look at these, I look on them fondly, and they bring back memories of those times, but I wouldn’t do something like that now. At that time, I really had no idea that I could dedicate my life to drawing comics. Now I see my art through a much more professional lens; I’m making my living from this. But these early comics are special. I’m really proud.” 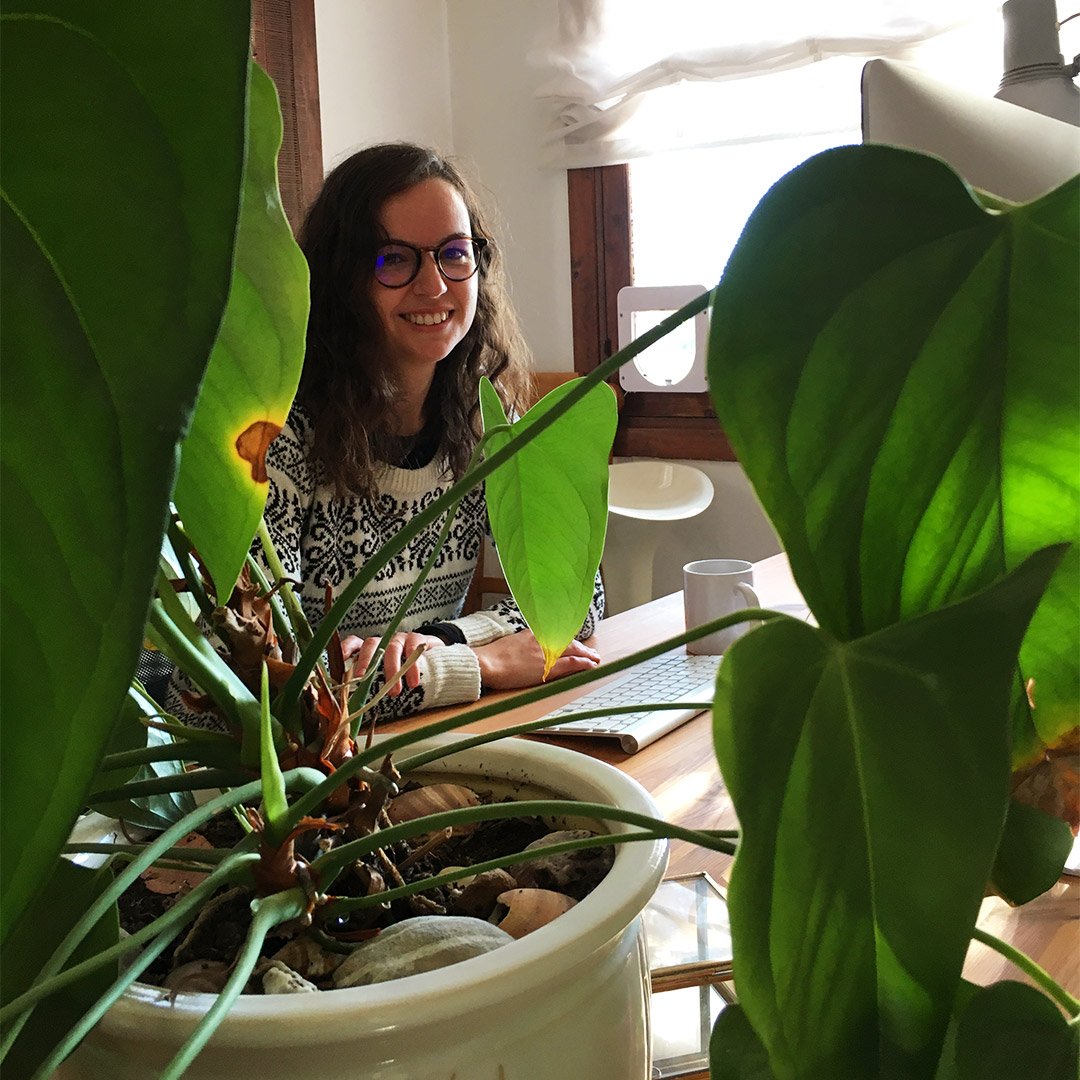 To a certain degree, Laura’s work is still a family affair. She’s currently working on two books with her sister, both set for publication in 2018. One is based on a comic series they worked on together, Divas de diván, published weekly in the style section (S Moda) of Spain’s preeminent EL PAÍS newspaper. The series draws its inspiration from the women of film noir.

“These are the very first comic strips (‘tiras’) we did. They tell the story of several different characters, but almost all of them are based on women from the start of the 20th century. Women with a certain character, with a lot of moxie,” Laura says. It represents a brand of feminism in which women hold a lot of power but also display a sort of eccentric flippancy.

“Right now, what I like the most in my job is specifically the aesthetic part of the drawings. I like to look up ideas,” Laura says, pointing to her pinterest board. A parade of black-and-white images flash by, all featuring women who commanded the big screen in the early days of cinema. “It’s a lot more open with my sister, because she tells me the story but doesn’t specify each frame. Even though she writes the text, I also feel like an author because we work really closely on the project.” Laura authors a narrative not through words but artistic depection, which sometimes tells another story.

Her comic series, Problemas del primer mundo, also published in S Moda and later as a book (Penguin Random House, 2014), features narrative where visual content sometimes overtakes text. It is no longer the word but the image that takes precedence, as in the story featuring a girl’s fashion choices continually thwarted by the weather, or in the story where a couple who loves to dance loves to tell others they don’t, or in the story of a girl trying to read in bed. The size, shape and style of each panel, as well as the placement of figures and speech balloons inside it, are thoughtfully crafted to affect the timing of each vignette. Panels envelop and disclose sequences of events in a narrative that resonates at the heart of everything we know. 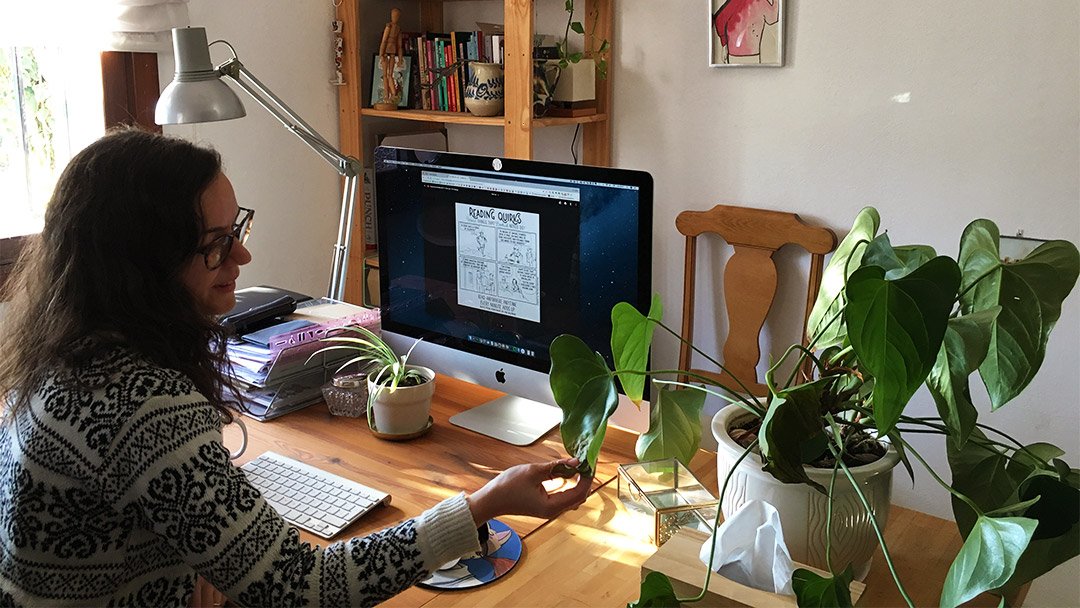 What Laura communicates through comics and illustrations that cannot be expressed any other way is a kind of humor. And you can’t really teach someone to be funny; you’ve either got it, or you don’t. As a follower of Reading Quirks, Laura’s comic series for The Wild Detectives, humor is one of the main characters. Andrés, WD’s brand director, supplies the weekly narratives and his vision of how the story should unfold, then Laura adds an additional layer of humor through artistic design. “I’ve been using this graphic tablet for the past year to produce the drawings,” Laura says, as she demonstrates how to translocate characters through one click and drag of the mouse, or how to control shading from the side bar. “But before that I drew them out with pencil and paper,” she says, a more labor-intensive process that created the kind of patience necessary to stay with the drawings longer.

Andrés first approached Laura when he asked her to revamp The Wild Detectives’ menu design, and idea for “Reading Quirks” eventually emerged out of that collaboration. “Now that I know him [Andrés] better and understand his sense of humor better, the process goes much faster and easier,” Laura says. She presents me with a series of extensive email exchanges to demonstrate how the two go back-and-forth, making precise changes to each panel, altering emotion or pacing of the story, until the comic arrives at its final stage. The series also invites instagram followers to collaborate on future editions by urging them to share their own reading quirks in the comments below each comic. This way, “Reading Quirks” puts out a collection of narratives that revolve around our shared experiences of reading. And let’s be honest, the act of reading may be individual, but the ultimate function of reading is to reflect on shared experiences.

I try to have regular office hours

Last year, Laura illustrated the book La decisión de Ricardo, by Mexican writer Vivian Mansour Manzur, which is something akin to Diary of a Wimpy Kid. It follows the life of a young boy, and his moments of decision and indecision, after his parents announce their divorce. Themes we know well but get to know all over again through the thoughts and actions of Ricardo.

For the time being, Laura wants “to focus more on illustration” as an art separate from comics. I’m sure other books are in her future, waiting to be brought to life by her illustrations. Laura loves what she’s doing so she doesn’t mind the work. In fact, she probably clocks in more hours than you or me, yet there’s a an indescribable lightness about her. I know this from observing her at work in the studio, and from listening to her describe her artistic process over steaming cups of green tea. 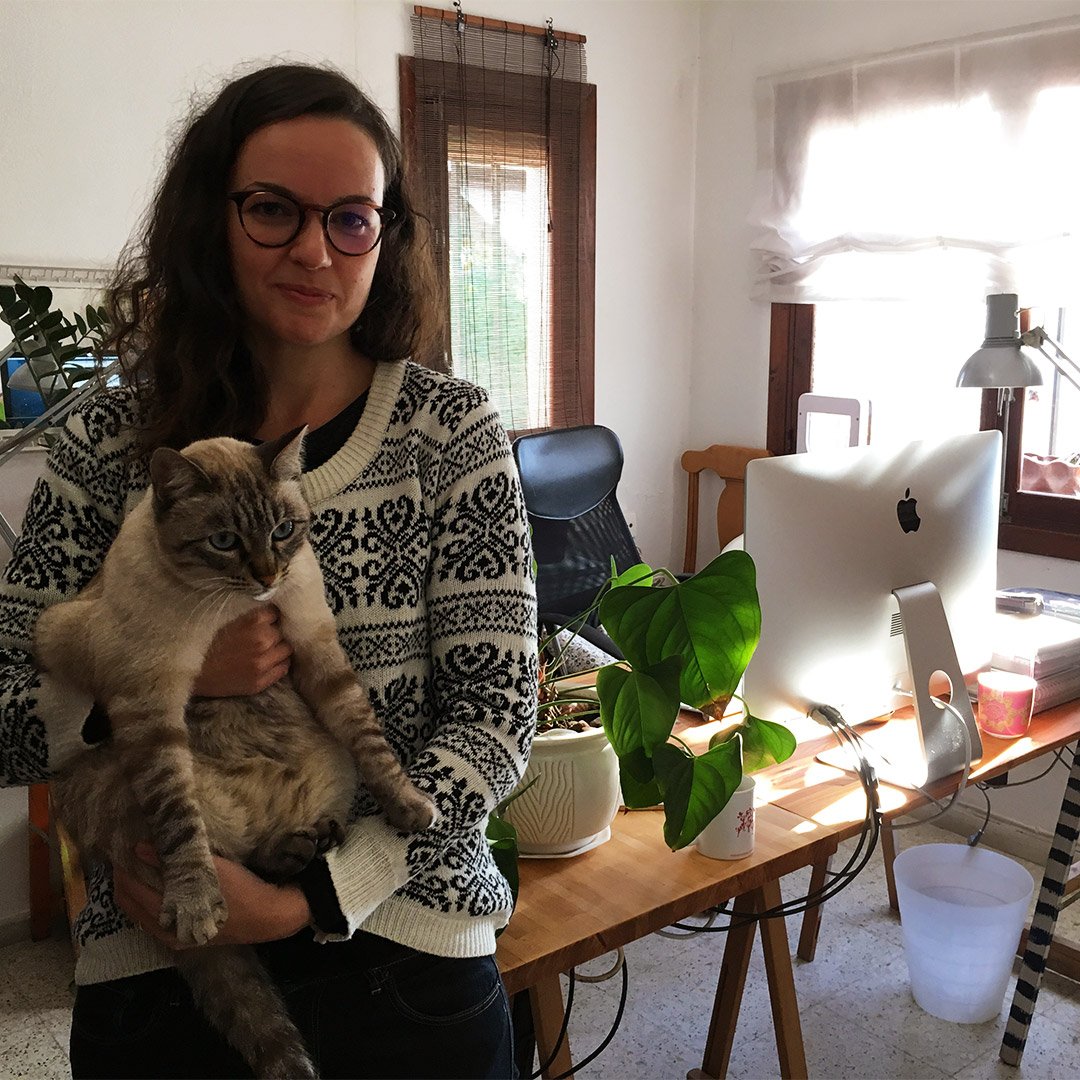 There’s also a structure to her work day that reminds me of an accountant’s schedule, with its discipline and regularity. Only by rendering many aspects of daily life automatic and habitual, William James once said, can we “free our minds to advance to really interesting fields of action.” The path to invention is paved with a thousand tiny rituals.

“I try to have regular office hours. I wake up very early, have breakfast, and try to be here [in the studio] to start working at 9,” Laura says. “Depending on the projects I have going on, that will determine my work for the week. I’m usually at different stages for each client, so my daily work depends on that. But sometimes I do need to leave the house. It’s very easy to be a workaholic when you enjoy your job.”